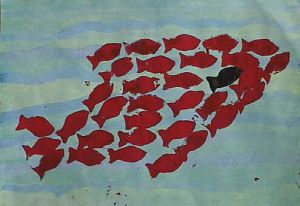 “When there are sharks in the water, how do the little fish survive?” That was the question Jeff Smith and I were discussing a few weeks back. Jeff is founder of Smule, the iPhone app company which is building an amazing worldwide community around music and creativity.

In this case, “shark” meant aggressive assholes companies who don’t play nicely. Was business just too cut-throat to be nice? Jeff was relating stories about the dirty practice of rival developers on the iPhone apps market using fake reviews to promote their own apps and bury competitors.

Turns out the best defense against sharks isn’t to try and become one yourself, it’s to empower your community as shark repellent. The best teaching of this principle doesn’t come in any business book or blog. Instead check out the children’s book Swimmy where our title character scares away a bully by getting all his other friends to swim close enough together so that they resemble a creature even larger. At the end of the day if you’re building something that inspires passion in your users and demonstrates values which resonate with them, well then, they can be bigger than anything else in the ocean.

One thought on “The lesson of Swimmy: your community as shark repellent”